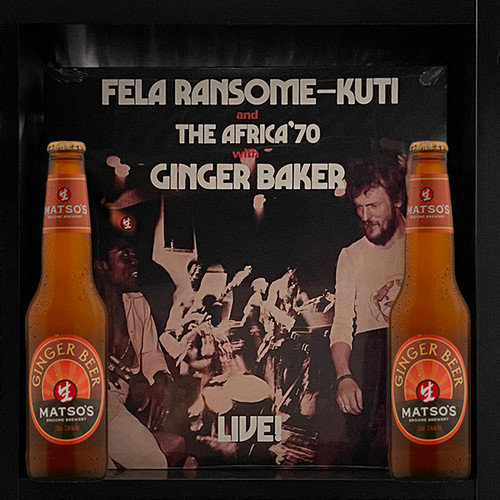 The 50th-anniversary reissue of Fela Kuti & Ginger Baker - Live! is pressed on double red vinyl and features an etching of the album artwork on Side D. Side C features Ginger Baker and Tony Allen's blinding, extended, dual-drums solos from 1978's Berlin Jazz Festival, re-mastered at Abbey Road Studios in 2021. This anniversary reissue marks the first vinyl pressing of these performances. Complete with a collector's gold OBI strip. Live! is notable for the maturation of several signature characteristics of Afrobeat that had only been present in foetal form on Fela's earlier albums. "Black Man's Cry" is an explicit expression of the philosophy Fela would later call Blackism; and his interaction with the Africa 70 horn section on "Ye Ye De Smell," where the horns repeat his sung phrases, and his sing-along passages with the band on "Egbe Mi O," are precursors of the call-and-response vocals that would become a key feature of Afrobeat.

Born out of WA’s Kimberley and now shared across the country, Matso’s Alcoholic Ginger Beer is the perfect way to escape the ordinary. It’s long been Australia’s favorite alcoholic ginger beer and we think it's the perfect companion to Fela Kuti & Ginger Baker's Live 2LP. Get the record and one six pack for $66 or two six packs for $84.

To really spice things up try adding your favorite spiced rum, half a lime (muddled), and a few dash of bitters together with Matso's ginger beer over ice and you've got the perfect summer refreshment.

Jimi Hendrix's Both Sides of the Sky LP & Blackbilly Sangiovese