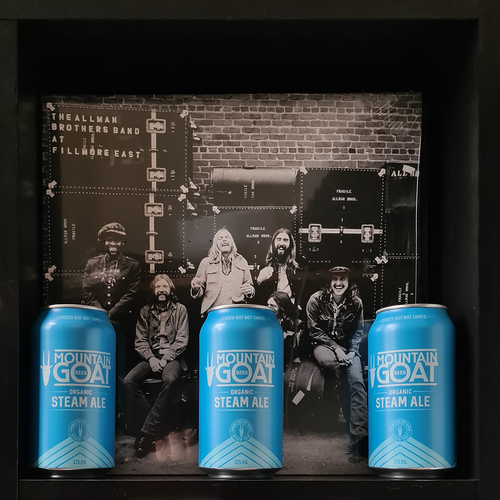 Mountain Goats' certified organic Steam Ale is a brilliant introduction to the world of craft or for those seeking a sessionable beer that is crisp, fresh and full of character. Steam beers were originally lagers brewed at the warmer ale temperatures, aiming to deliver the best of both worlds. We decided to do our own spin by fermenting an ale yeast cooler to arrive at the same place, but via a different route.The result is a crisp, seasonable beer, fresh and full of fruity and tropical characters.

Recorded over three nights in March 1971 in New York's Fillmore East club, this album is the Allman Brother's Band third release, their first to go platinum, and to this day their top selling album. Considered by many to be one of Rock's greatest live albums, this smooth organic rock goes best with Mountain Goat's smooth certified organic Steam Ale. Steam Ale is a brilliant introduction to the world of craft or for those seeking a sessionable beer that is crisp, fresh and full of character. Grab this LP and one sixpack for $70 or add another sixpack for another $12.

Jimi Hendrix's Both Sides of the Sky LP & Blackbilly Sangiovese